The new translucent mirror camera from Sony is very similar to its predecessor. But at the same time, the A99 Mark II model received many changes. The most significant of these is the upgraded image sensor, which now has a resolution of 42MP and is made using Back Illumination (BSI) technology. But a lot of changes can also be found on the camera body.

The main feature of the camera was its autofocus system. It is written about here: https://www.artlook.us/service/sweet-16-photoshoot/.

The A99 II houses a dedicated PDAF sensor, which has 79 AF points, of which 15 are cross-type center points. The center dot is designed for very high sensitivity at wide open apertures. It works down to -4EV brightness levels.

The rest of the AF points are on the dedicated sensor of the horizontal type, while all of its 399 points located on the main image sensor are of the vertical type. When used together, they provide what Sony calls hybrid cross-type autofocus.

The silent control dial on the front of the camera has been redesigned. In addition to being able to rotate freely for smooth control of parameters in video mode, it now gets a switch that adds clicks. This means that the dial can now be used more conveniently when controlling step settings.

Sony has updated the camera menu to make it easier and more intuitive. Now it’s easier to navigate. Some related features are now grouped together. For example, everything that downloads 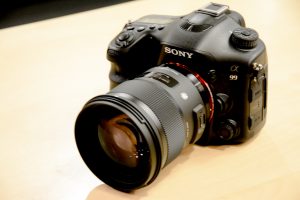 a video is now in one place. The tabs at the top of the menu are now color-coded to help you recognize and remember which section of the menu you’re in. It remains to be seen how convenient this is, but it’s good that Sony is trying to simplify and reorganize its menu.

The camera has a multi-folding LCD display just like its predecessor. There is a hinge on the bottom of the flip mechanism that allows you to rotate the camera. This allows you to tilt the screen in different directions.

Many other smaller improvements you will find when using the camera. For example, after shooting a series of frames, you can now start viewing pictures without waiting for the recording to the memory card. The first photos will be available for viewing, and as they are recorded, the rest can also be viewed. An indicator will be displayed on the screen telling you how long to wait until the remaining files become available.

The A99 II also gets an anti-flicker mode for shooting under artificial lighting. This synchronizes continuous shooting at the brightest point with flickering light.